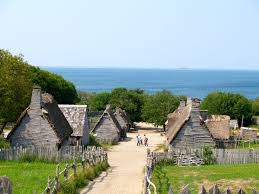 Take your child back to 1620 when you visit the living history museum at Plimoth Plantation (yes they spelled it differently back then). Your child will learn a sanitized historical lesson on the pilgrims and the sailing on the Mayflower in school. Here, you get to walk around a re-created Mayflower and get a firsthand impression on what life would have been like going back and forth to England in the 1600’s. At Plimouth, sit down and talk to the townspeople who will tell you what life is really like. Discuss religion, farming, education, living amongst the local Indian tribe, medicine and anything else that comes to mind. Sit down and talk with Governor William Bradford or professional soldier and military advisor Myles Standish. Leaving Plymouth, England in September 1620, 102 passengers on board the Mayflower headed west across the Atlantic seeking religious freedom or wanting to start a new life. Having been granted permission to establish a settlement in the territory between 38 and 41 degrees north latitude (have your child figure out where this would be) by the Virginia Company which held the crowns charter (controlled Jamestown settlement as well). After two months at sea in the worst winter weather they landed at 42 degrees north latitude, well north of where they had been given permission. Worn out by the voyage and given there was no one around to press the point, they decided to stay. Winter in modern day Boston is miserable. Half the passengers died that winter from disease, poor nutrition or exposure. In April the Mayflower set sail back to England leaving the survivors to fend for themselves. The spot they picked to build their village was an abandoned Indian village whose inhabitants had been wiped out by a plague several years before. There were multiple Indian tribes in the area but it was not until the bold tall Abenaki Samoset strolled into camp one day announcing, much to the surprise of everyone, in English: “Welcome Englishmen”. Samoset had learned a little English from fishermen who had plied the coastline for several years. Thus began the English/Indian relations which would become very complex and tragic from time to time. There is little doubt, without Indian help, the early pilgrims would not have survived and it is the result of the first harvest which was shared by everyone that we today celebrate Thanksgiving Day.

There is much to see and do at Plimouth Plantation, but you have to go there to truly appreciate the history that laid the foundation for Boston, our founding fathers and the American Revolution. Plan to go around Thanksgiving and experience the local weather these hardy pilgrims lived. Check out the Plimouth Planation website for more details : https://www.plimoth.org/

Call your travel adviser to learn where to stay, when to go and other places to visit nearby.